Disney After Hours first debuted this hard ticket event last year, on select nights Magic Kingdom opens from 8pm-11pm/9pm-12pm/10pm-1am, depending on the season, to a handful of guests.

The amount of tickets sold for the event are unknown and not published by Disney, but the rumour is up to 3000 tickets sold. Which is a very small amount, considering park capacity for Magic Kingdom is 95,000 guests and on any average day 75,000 guests will visit this specific park.

After making your way through bag check and security, you enter the park through a separate line clearly marked up as After Hours. After scanning your magic band a cast member will give you a wristband to show your admission to the event. Ours was plain pink, similar to the wristbands at MVMCP and MNSSHP, cast members use this to determine who can go on attractions, visit characters and enter specific parts of the park after the regular closing time. 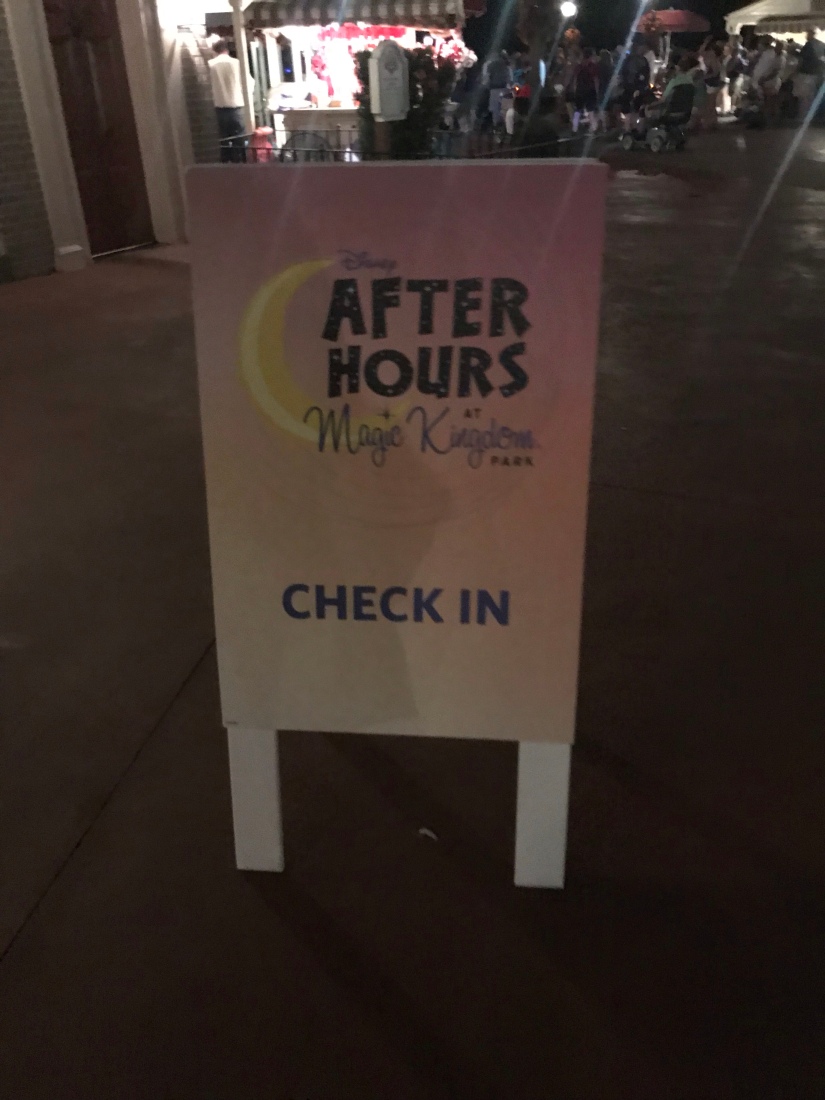 This lanyard was for show, I was told this by plenty of cast members that it did nothing. However I needed to have it! Instagram photo OK!

This is the leaflet they hand out at the entrance after checking in. 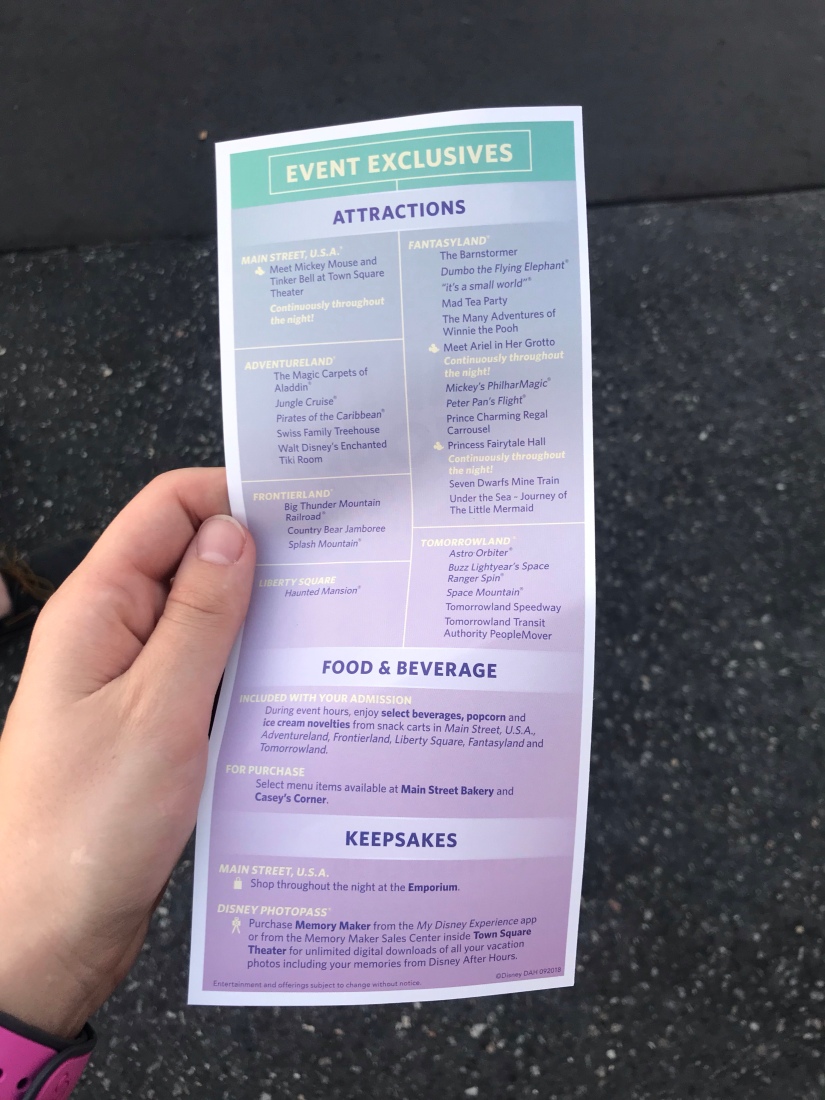 During the event select attractions are open, select character meet and greets and select free snacks are available to guests. Something that made us laugh during the event, the longest lines were for the free drinks and snacks, not the attractions.

Of all the attractions on the list we went on them all and we went on Buzz Lightyear Space Ranger Spin and Haunted Mansion twice, Sam went on Big Thunder Mountain twice and we managed to get our Rapunzel lantern photo taken too, we didn’t ride Space Mountain and we didn’t meet the Princesses as we had met them the day before at Cinderella’s Royal Table. 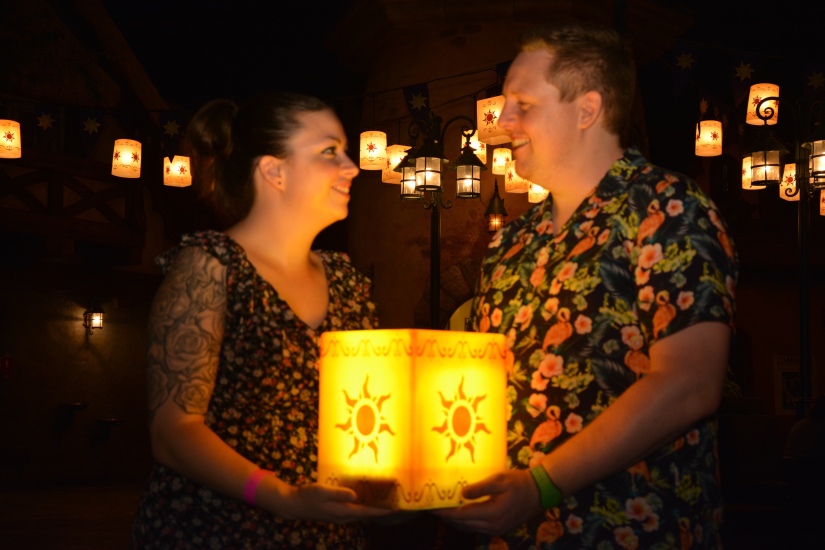 In the photo above you can see how extremely quiet on Main Street.

3 hours for the event is more than enough time to complete everything that is open, never will you ever see the park so quiet, (unless you have an early morning breakfast reservation). All attractions and character meet and greets are practically a walk on. The only waits were early on in the event when the days guests were still inline for Peter Pan’s Flight and Seven Dwarves Mine Train, we left these until the end of the night.

I would happily choose this hard ticket event over MVMCP and MNSSHP anyday.

My only negative about it, and believe me it only small, the event started officially at 9pm, Happily Ever After started at 8pm and finished 30 minutes later, it took so long to get day guests out of the park. Despite not being able to get on any attractions, we still saw people with no wristbands to the event around 10pm. This annoyed me because you do not see how truly quiet the park is until an hour or so in to the event.

I purchased our tickets in July and the tickets cost $119 each, I would happily pay up to $200 for the experience we had that night. Disney have announced a further 12 dates from December 2018 – March 2019 however ticket prices have risen to $125 each.

We saw a variant of ages of guests at the event too younger and older guests. Families, couples and groups of friends so it clearly appeals to all. If you are only able to visit one day at Magic Kingsom then this is perfect for you. It gives you a chance to do nearly everything in Magic Kingdom in a few hours.

Would you visit the Disney After Hours event? Do you think it is worth the price or not? Let me know your thoughts in the comments.

4 thoughts on “Disney After Hours review”