I probably wont be the first person to say that MK (Magic Kingdom) is their favourite park.
I could not say for sure what was second, Animal Kingdom and EPCOT both hold special places in my heart, so to pick one to be my second favourite would be tough. I digress, Magic Kingdom is famous for the MNSSHP (Mickey’s Not So Scary Halloweeen Party), dole whips and space mountain.

This park makes me feel like I am home and my happy place all in one and I for one love it. I want to meet the all princesses, ride The People Mover and eat all the snacks.

All the fast passes in MK are all on the same tier so here you can book any three you choose. Peter Pans Flight and Seven Dwarves Mine Train always have long waits so would either recommend rope dropping (getting to the park before it opens) or fast passing these attractions.

Top attractions in MK are The People Mover (a slow moving carriage which tracks are above Tomorrowland), the three Mountains, Splash, Space and Big Thunder, Pirates of the Caribbean and Carousel of Progress. I was a huge Florida POTC fan until I visited Shanghai Disney and their version of Pirates blew me away. If you get a chance go there and do it. It is the best thing I have ever done and I do not think another attraction will ever top that ‘oh my gosh, this is amazing’ feeling it gave me.

Dole whips are a fan favourite in MK. It is a pineapple soft serve dessert which you can get by itself, as a float or upside down cake. You can not go wrong with any of these choices. Other popular choices of snacks in MK are, they citrus swirl, similar to the dole whip however has a citrus flavour instead of pineapple, the Cheshire Cat tail, a chocolate twisted pastry with purple chocolate decorations on top and LeFeu’s Brew which is located in Gastons Tavern. It is a apple/marshmallow frozen drink with a passionfruit foam on top. It’s delicious. Mickey shaped prezels, are a warm salted pretzel that come with a cheese dip and extremely Instagramable.

Be Our Guest and Cinderellas Royal Table are popular ADR choices. Be Our Guest is stunning inside and has a gorgeous ballroom exactly the same as the animated film with the hanging chandeliers and artwork on the ceiling, if you look closely at the faces of the cherubs they are based on the imagineers who designed the resturant. It has quick services breakfast and lunch options and a $55/ 2 dining credit pre fixe menu for dinner. Cinderellas Royal Tables is located on the first floor of Cinderellas castle. Breakfast, lunch and dinner are all 2 credits and a pre fixe menu. The princesses will visit each table and interact with you during your meal. 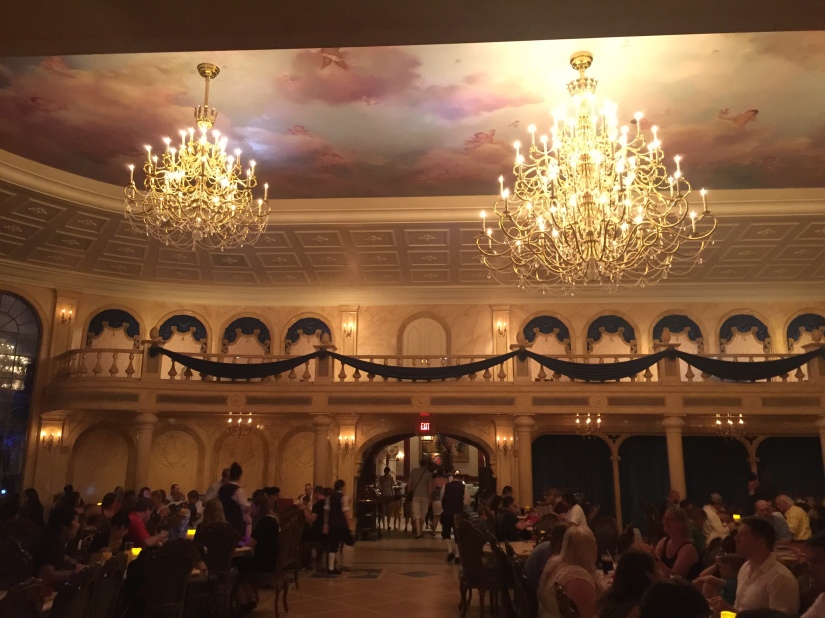 (The Be Our Guest ceiling, it is even more stunning in person).

If you are after a quick service meal the Pecos Bills Cafe, it is arguably one of the best on property, due to cost versus portion size and choice. Spanish inspired food with a self serve topping bar. Holy unlimited guacamole.

The big merchandise store on Main Street USA takes around $1 million a day. Looking at the products and range its not hard to see why. Even one of the small popcorn carts can take up to $600 a day.

Magic Kingdom host seasonal events, MNSSHP usually runs late August through to the beginning of November and MVMCP (Mickeys Very Merry Christmas Party) running from early November to 23rd December. Both are considered a ‘hard ticket event’ which means the admission to these events will need a separate ticket purchasing, the cost (usually ranging from $89 up to $119), is not included in the regular park admission. Each event has their own parade and firework show. If you want to see the Christmas parade, wait until December 24th and 25th, the regular 3pm parade is replaced by the MVMCP parade. If you only have the event ticket, you are allowed in to the park around 4pm when the event starts at 6pm.

(Elsa has lit up Cinderellas castle at the Frozen Holiday Wish show during MVMCP).

1 thought on “Magic Kingdom, an overview”